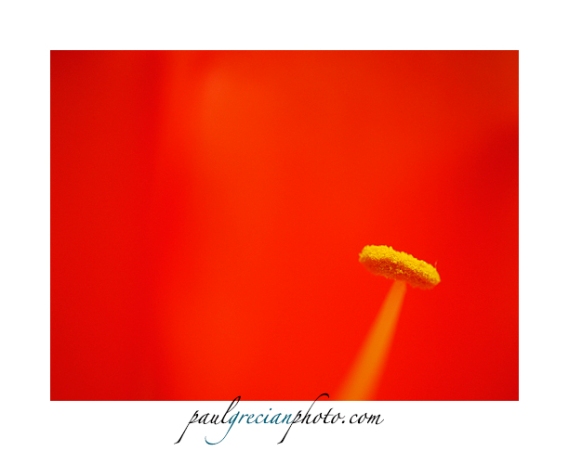 My first foray into the medium of photography was in making close-up images, technically called “macro photography.” Growing up in a city, even in rather suburban-like Northeast Philly, I had access to limited nature. My interest in nature drove my image making anyway. Because of this, I had to find my inspiration in very small areas (square feet instead of square miles). A macro lens allowed me to make images within a field of view of inches. At that level of exploration, everything becomes interesting and new.

Since that time, the content of my images has expanded to include every scale of nature (wildlife, landscape, even the universe!). Now I live on a farm (very un-city like). And, I find myself looking to explore again at the macro level. I find that I can express as much in the space of a few inches as I can in a landscape depicting a few acres.

Images of the macro kind are made with the same thoughts and feelings as any other type of image. I still deal with experiences, metaphors, color, line, shape, texture, light — just in a smaller area.

Above is an example of an image I made a while ago at Longwood Gardens (just outside of Philly). It is a minimalistic piece with strong color. The color content is harmonious more than complementary. The yellow against the red is very powerful. Keeping the brighter yellow as a small part of the image, I feel, keeps the image balanced.

“Just as you say that a body feels warm to the hand, so you might say that it feels red to what you see with” ~ Virgil C. Aldrich. 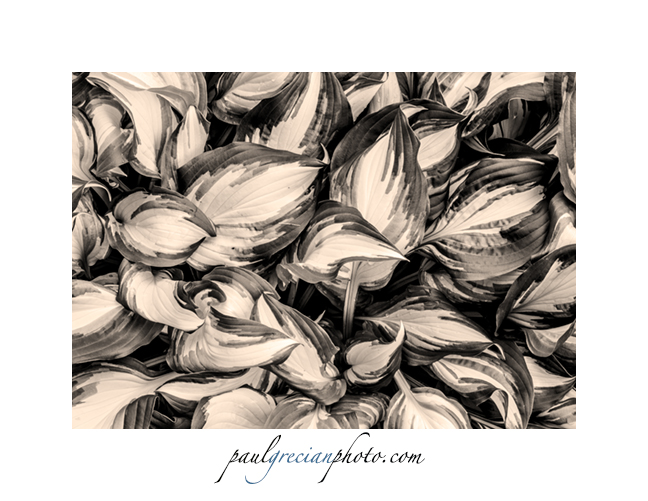 Artistic growth. It is not something planned, it happens organically as experience and knowledge are gained. When I first started working with a camera, my primary intent was to record what I saw. It was a rather literal representation that guided my purpose.  I’ve been working with a camera for 40 years though and have long understood that photography is not just a literal medium. It is a selective, abstracting, very plastic medium when so desired.

When one looks at the world with artistic vision, with the need to express feeling, and personal values, the medium of expression is of little relevance. I find myself less interested in the typical photographic renderings based on sublime locations and extraordinary events. If an image elicits a response of “luck”, “right-place, right-time”, or “where did you get that?” I wonder if I am creating something personal enough. While, there are certainly times and places which drive me to make images, I hope that those images are more than recordings. I want them to be about something bigger than the content in the frame.

While any selective process has an element of personal meaning to it, I acknowledge that  my response to an event or place can be guided by a desire to impress others or for financial gain. As an artist who must live off the work he does, I accept that my motivation is from more than one thing. But also, as an artist, I have to create images consistent with what drove me to be a full time artist. Right now, that work is rather different than when I started, and even different than what I was creating 5 years ago. If I were still creating the same pictures that I was 30-40 years ago (or even five years ago), I would be stating that my life and experiences have led me nowhere new, that I have not grown, or changed in any way. And that would not be true.

Much of my new work is done on the 7 1/2 acres of farmland my artist wife and I own, or in my studio within the farmhouse. Here the aesthetic experiences are simple but no less profound. As in other locations where I have worked for many years, I see more deeply with increased submersion. On or near the farm, I have daily, seasonal, and yearly interaction with nature and it is here that my most authentic work is now done. 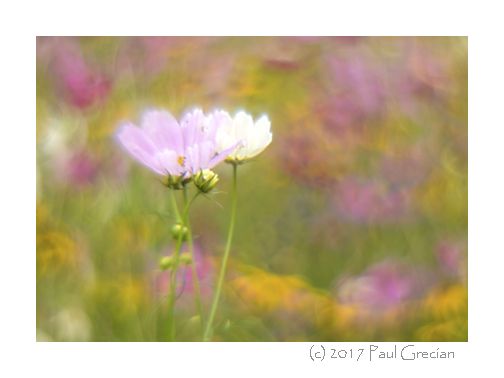 My approach to the medium of photography is as an artist. Because of this, I try not to have preconceived notions about how photography “should” be done and think instead only of the imagery I want to create. I do however work within the medium to create images that are best rendered as a photograph, not in a contrived way in order to make it look falsely like another medium.

field through the use of traditional photographic methods, i.e., camera and lens. For an impressionistic image like the one above (titled Opus 1), I used an old 120mm f1.9 Carl Zeiss Jena film projector lens which had been fitted with an adapter giving it an M42 mount. With that mount, I was able to then add an additional adapter to allow it’s use on a Fuji digital interchangeable lens camera.

As a film projector lens, it has no focusing mechanism, no aperture control, and no way to communicate with the camera. The M42 adapter on the lens has a built in helicoid which allows me to “focus” it buy turning the lens and causing it to be closer to or further away from the camera sensor. With no aperture, the lens is only usable at it’s f1.9 rating. This large aperture means lots of light gets in and  depth of field is very thin. But for me that’s the whole point of using this big, hazy, scratched, and fungus growing, chunk of glass.

The lens is a beast and unruly on a camera, but I feel the rendering matches my aesthetic very well. As I continue to develop a view of the world which is more impressionistic, I find myself wanting to use this lens more and more. For the image above, I had been struggling with modern traditional lenses to isolate flowers in this meadow and simplify the background. The fall off of focus with this projector lens is very sudden and creates a unique type of bokeh that I have not achieved with any other lens.

Many people think that Opus 1 is a painting. I inform viewers that it is in fact a photograph, but one done in a painterly style. By painterly I do not mean the use of artificial brush strokes, but rather an emphasis on color and form instead of linear definition.

I’m looking forward to this weekend. I will be exhibiting with the Pennsylvania Guild of Craftsmen at Rittenhouse Square in Philadelphia.

There will be new work! I have been creating images with a couple unique themes. I am excited about both new bodies of work. The first set of imagery is being done with a variety of antique lenses and plays with light and color as reflected off of the flowers that grow in meadows near my studio. The second set of imagery is being done with macro lenses and deals with light refraction off of water drops on plant leaves and petals. In future posts I will be speaking about these new bodies of work in more detail.

The image below is part of the first new body of work and was made with an antique Meyer Optik Gorlitz 135mm f3.5 lens (Exakta mount) that I purchased on eBay from an overseas seller. The lens, when used correctly, can render background elements with a very soft, etherial feeling. The out-of-focus highlights expand into spherical shapes that I find very pleasing. I used the lens on a Fuji XT-10 camera body with an adaptor that allows it to be used on the camera. Exposure is done in manual mode as is focusing, but the Fuji has a wonderful electronic viewfinder which allows me to precisely select the area I want to be sharp. 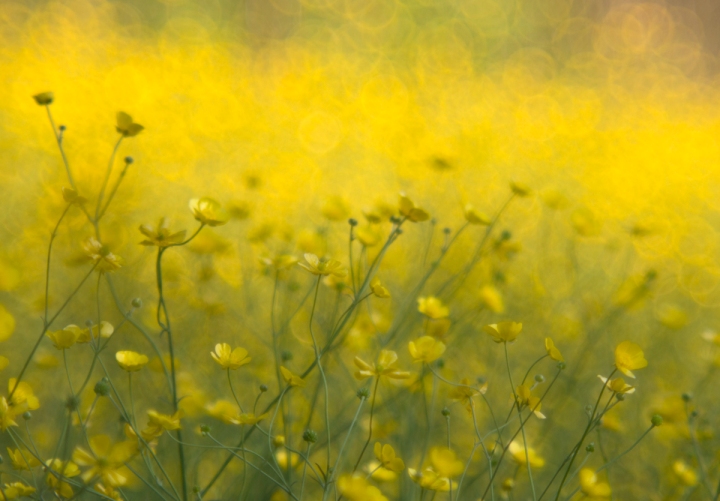 I am still having trouble driving around here in Pennsylvania without getting distracted by the wonderful fall display this year. I like each part of the color transformation starting with the earliest changes and ending with just color accents on the trees. I can’t safely pull over everytime I feel inspired while on the road. Working at Ricketts Glen State Park however doesn’t pose that problem.

This image was made after a heavy rain which really got the water flowing fast and furious. But the image is designed to also emphasize the stone stairway on the left. Pathways have been a theme of mine for many years. In this case the stair path also provides a visual alternative to following the flow of water and balances the fallen tree trunk on the lower right. What I especially like is that the stairs give me a way into the image and a mental place from which to explore the entire scene.

I have been working with a Micro-Four-thirds camera system made by Olympus for some time now and have been pleased with my results. Importantly, I also find that there are certain types of image making and certain kinds of locations where a small profile camera system allows me to stay active and flexible.

My show year still has six events on the calendar including a Sugarloaf show this weekend in Oaks, PA. Go to my website for my full show schedule and additional galleries of work – http://www.paulgrecianphoto.com

During the past 9 months I have been working on a series of images depicting the lives of a group of barn cats residing on a small Pennsylvania farm. There have always been cats in my life and I have found their behavior and beauty a tempting subject for years. I approached this project from a fully visual perspective but can not help be enthralled by their behavioral interactions with each other. I have also become very appreciative of how hard their lives can be even when they are provided supplemental food.

In many ways these cats are living like other wildlife; they are dealing with the elements, sickness, and even predators. I find myself viewing them now as I would have any animal I studied while earning my degree in Psycho-Biology (Animal Behavior). This cat project has become very personal as I have come to know these animals as individuals. Even in what seems like a rather short period of time working with the cats I have seen some come and go, empathized with there feelings of lose and cold, and rejoiced in the new births.

This is a project that will continue over time as the group is a dynamic and fascinating subject for me. I am currently showing a selection of images from this project at Artist’ Gallery in Lambertville, NJ. I will also have several from the series at my regularly scheduled art show events. See my full schedule at http://www.paulgrecianphoto.com.